skip to main | skip to sidebar

Off he goes, in to the wild Blue Zone

Andrea has gone to Greece for two weeks. He and his brother Tony and their uncle Andy are flying today from Athens into the little airport at Faros on Ikaria. This is something I hope to never do. For one thing, the airport at Faro makes the Medford International Airport look like LAX. Please note in the photo how the runway ends at a little cliff above the sea. And who, I ask, would willingly board a dinky p

lane headed for an island named after a guy who fell out of the sky and into the waves? There is even a big statue of Icarus in front of the airport (you can sort of see it in the picture). Aristotle would call this hubris. I would say take the boat. Aack.

Andreas is going to Ikaria with his uncle Andy so they can sort out the family property there. They need to get it surveyed and registered with the authorities so it doesn’t end up belonging to the guy storing lumber in the old kafeneo or the other guy who’s using one of the houses as a goat shed. Andreas is also (we hope) finalizing his paperwork to become a Greek citizen. We shall see. 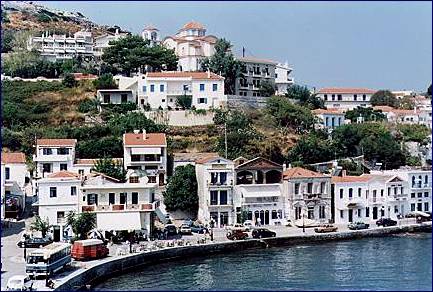 The travelers aren't actually staying in their own village, which is called Arethousa. Instead they're staying nearby in the larger port town of Evdilos. Andreas's aunt called from Athens last week to warn them not to stay in Arethousa because two guys there want to kill Uncle Andy. Eighty-year-old Uncle Andy hasn't been to the island for thirty years but he seems to inspire that kind of thing in people. Andreas emailed me to say that Uncle Andy nearly caused an international incident at Orly airport last week when the French customs officer got a little too personal.

Ikaria recently found itself in the limelight once again after being identified as a “Blue Zone”, one of those places where people live to remarkable ages. Here’s a short video about it. Apparently there's a best selling book about this Blue Zone thing. It was even on NPR. For those of you who have a lame computer like mine and can’t watch the video, these are the “eight simple secrets” of becoming a very old Ikarian: